“Partially” cuz you could seriously blow right by this place!

The roots of why we started this blog is because of places like Heibeck’s Stand in Wilton, a roadside “burgers, dogs, and ice cream” haunt that’s been about for a while. Heibeck’s is rich in history, and its roots go back to 1931! You can read more about it on their website.

Heibeck’s has been on the Food Dudes’ radar for quite some time and each of us is guilty of blowing right past it on our way up and down Route 7 for many years. Other than browsing their website briefly, I never really knew much about it except that some of our followers seem to really like it and go there often.

Recently we were in Danbury to visit our friend Luis, but neglected to have dinner because we had a late lunch. On the way home we wondered if Heibeck’s would still be open and to our delight, it was! We coasted into the parking lot, not ravenously starving like we usually are, but with room enough for a couple hot dogs each. 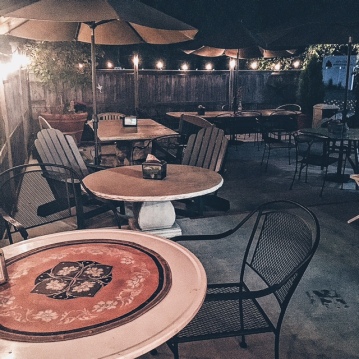 Processed with VSCO with hb1 preset

Processed with VSCO with t1 preset

Processed with VSCO with hb2 preset

We came to find out that Heibeck’s was more than just a pickup window but that they have a bunch of patio space! In front, on the sides, in the back, and it’s mostly under a roof. I suppose you could also opt to eat it in the whip too. (That’s slang for CAR)! Another cool thing we noticed was the BYOB sign, so yeah, we’ll be doing that! And if you pay attention to their social media, Heibeck’s is pet friendly so you can absolutely bring your dog or Sasquatch with you 🙂

We ordered up some of their signature hot dogs, the Dirty Dog (homemade chili with cheese and onion) and their namesake called The Heibeck (homemade spicy relish, mustard, onion). The verdict on the dogs was favorable. Each is a beefy Hebrew National link, served on a griddled Martin’s Potato Bun, and they were stocked with wonderful toppings. The Heibeck’s particularly earned praise with us for their tangy relish that had a kick but nothing that killed the hot dog. It’s also cool that they seem to make most of their own sauces, and they have more than just the norm for a stand…they’ve got falafel, lobster rolls, chicken fajitas, crispy cod tacos! Sure, burgers too, which I may opt for next time, but those tacos might edge out a burger ever so slightly.

If you didn’t know, Heibeck’s makes their own ice cream and you have to treat yourself to one of their many flavors. Rob destroyed a cup of Deep Purple Cow (black raspberry ice cream with dark and white chocolate chunks) and I did a number on an old school cup of maple walnut, which had a deep maple taste and plenty of chopped walnuts.

It took us a while but we’ll never not stop at Heibeck’s Stand again. It’s great for a quick bite and if you’re full, at least stop by for ice cream.